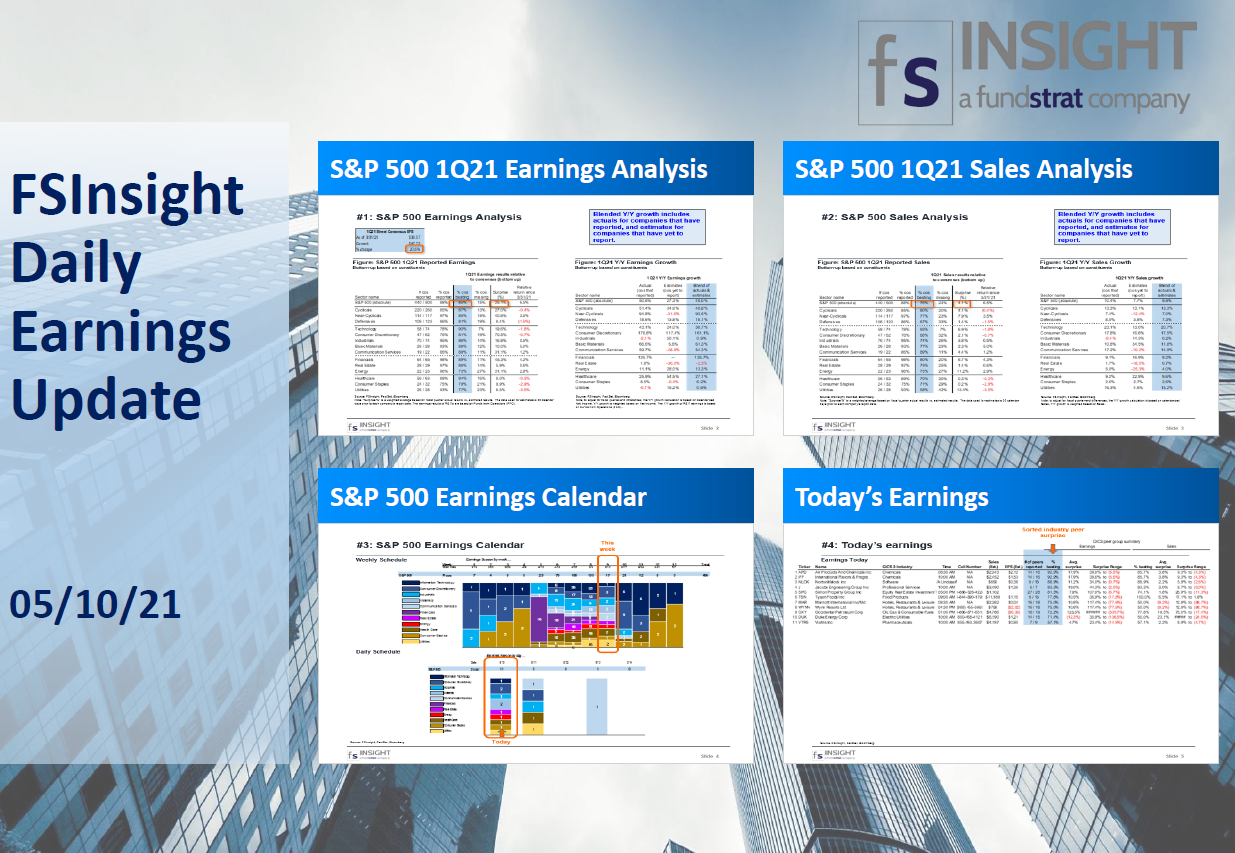 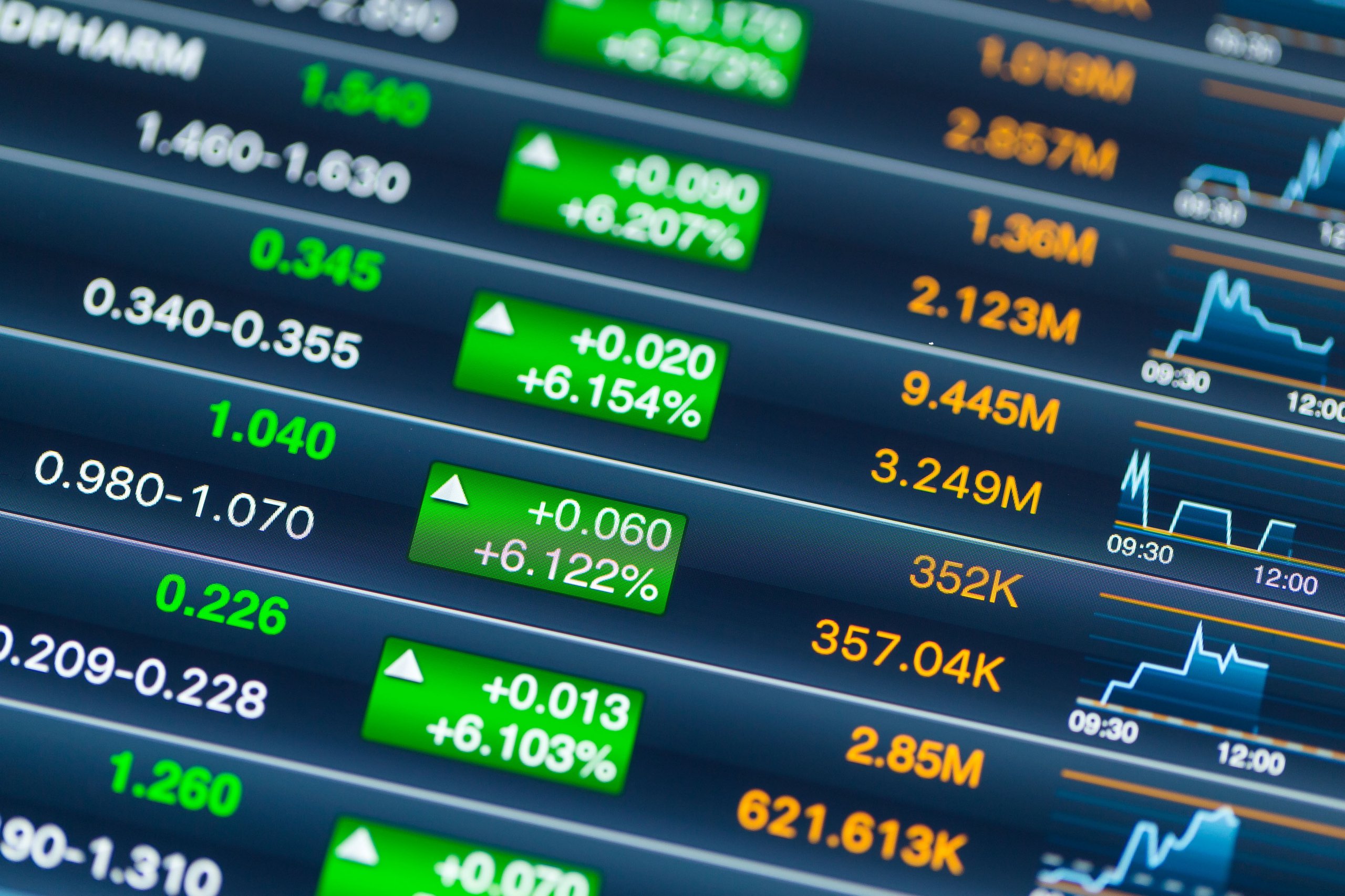 In the United States a steady and persistent decline in cases continues. The 7D delta has been negative in the past 23 days. In the past few days, the &D delta has also been accelerating to the downside again. If the speed of this decline continues at its current pace then we could the daily cases drop below 20k by mid-May. As we wrote before, at this stage of the pandemic, as long as vaccinations work (evidence overwhelmingly suggests they do), eventually the successful rollout will lead to a persistent decline in cases. Based on the recent data, we think that decline has arrived. Despite what is clearly playing out in the data and the undisputable fact that with the dramatically increased immunity, particularly amongst the most vulnerable cadre, there is simply less places for the virus to go the CDC has provided a pretty strange forecast for a major spike from May to June. Their forecast is apparently due to the spread of dangerous variants that elude the immunity provided by the vaccines. However, our preferred forecaster for COVID-19 data the IHME shows no such rise. The CDC has been generally slow to lift recommendations. They are allowing sports and indoor dining but not cruises with all vaccinated passengers. Dr. Scott Gottlieb also pointed out that they were wrong on the science surrounding outdoor transmission. So, we are taking the CDC forecast with a grain of salt, while accepting that it is certainly possible that it could occur. If they are right it would be a headwind for markets. In mu opinion, and only my opinion, the CDC’s latest forecast seems to be borderline ludicrous. The IHME baseline is a continued collapse in US cases. If the IHME forecast is correct than Epicenter will rally. STRATEGY: 1Q2021 Earnings “Don’t Matter’ as Comps Not Realistic- 2Q2021, 3Q2021 Matter Way More Many clients are concerned that stocks are peaking, because stocks are not reacting to ‘strong EPS’ results, and in fact, are often selling off. I can think of at least 7 reasons that stocks do not have to react to ‘great results’- of which, only 2 are actually bad signs. But in my opinion, the main reason stocks are not ‘reacting to 1Q2021 results’ is that the year ago comparison is to March 2020 when the economy was six weeks into an unprecedented economic depression caused by a synchronized shutdown. Do comparisons vs the ‘first stage’ of the pandemic collapse, when revenues were often near zero, matter? We don’t think they matter all that much. Realistically I think the YoY vs 1Q2020 is simply going to look mental. So I would not place much weight on the results. And to me, it seems like equity markets are reacting as such. The next two quarters are more important than comps to the heights of COVID induced economic devastation. If you were wondering what the fuller list of possible reasons of why stocks do not react to EPS, here it is. Two potential bad reasons are that 1) good news is already priced in and that 2) no shorts have to cover. Two medium reasons could be 3) incremental buyer doesn’t care for earnings and thus doesn’t react and 40 market is trying to process hairs of inflation. Three good reasons for why stocks aren’t booming on good earnings could be that 5) people aren’t chasing earnings 6) which could mean retail is getting smarter and not gambling on earnings calls or 7) nobody cares about comparison to March 2020. 1Q2021 EPS had been beating estimates by 19% which would be considered extraordinary under normal circumstances. The upside has been strongest in Cyclicals (+27%) and Near-Cyclicals (+41%) as compared with Defensive (only +8%). The beats by even Defensives, let alone the others, would be considered very outstanding in normal years. STRATEGY: Structural Tailwind for Energy. Per Rystad, $300 bn of Oil Capex Taken Out Since 2020 This is one of the reasons why we continue to be so bullish on Energy. Epicenter is leading and performing very strongly. In fact, for the first time in nearly 6 months of being bullish on Energy we are finding institutional investors developing incremental curiosity about the sector. And as many readers know, Energy is a sector investors have largely ignored for the past decade and this was even more true since the beginning of the pandemic. Rystad Energy (rystadenergy. com) is an independent Energy research boutique, headed by Jarand Rystad, published a report today that points the E&P sector has cut investment (capex) by $300 bn since pandemic started. This will have lasting impact in their words. There is quite a lot of good material in this report and we hope to do a joint webinar with Rystad in coming weeks, so we can more fully explore their views an analysis. The dramatic cuts will result in a structural gap that can only be corrected by setting capex higher. North American oil production is set to fall by 3.0mbpd by 2022 alone. An additional 1mpbd will be taken off as well. That is a level on par with the annual oil production of Iraq and exceeds Iran’s and Kuwait’s production. This is a pretty stark deficit and would be hard to dismiss. This goes further to support our recently reiterated bullish call on the Energy sector. Bottom Line: Despite the diminished importance of 1Q2021 earnings due to anomalous comps, Epicenter is leading in terms of beating expectations. Energy is looking particularly appealing and has the best of alignment of supply/demand dynamics developing for a decade or more. We continue to recommend Energy and think it will be among the best, if not the best, performing sectors of 2021. Figure: Way forward ➜ What changes after COVID-19Per FSInsight Figure: FSInsight Portfolio Strategy Summary - Relative to S&P 500** Performance is calculated since strategy introduction, 1/10/2019 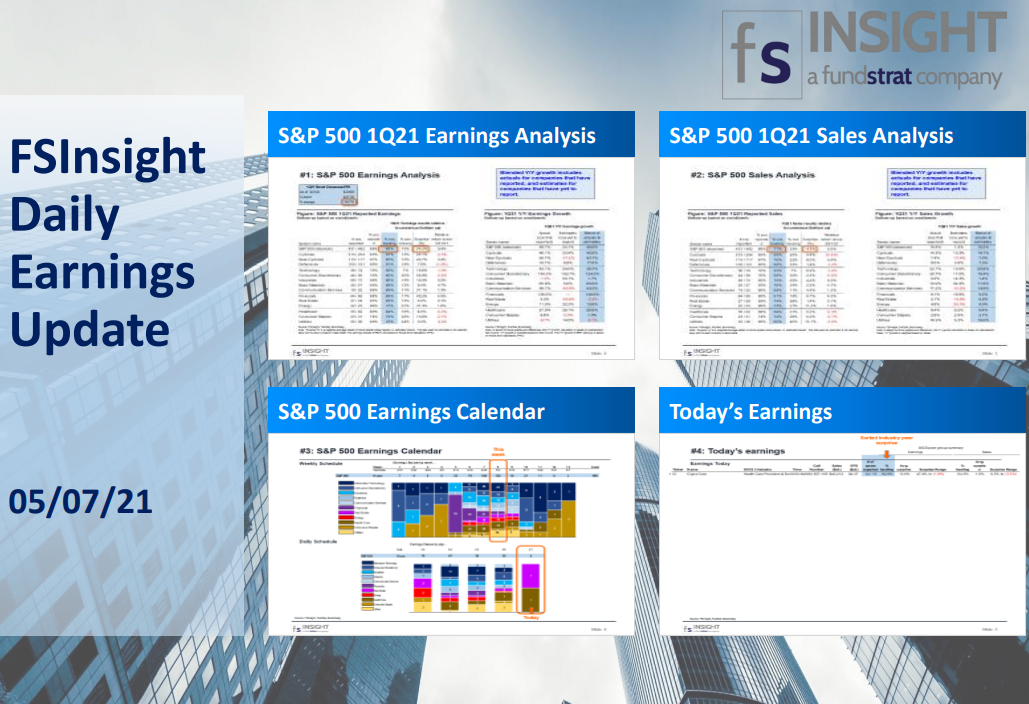 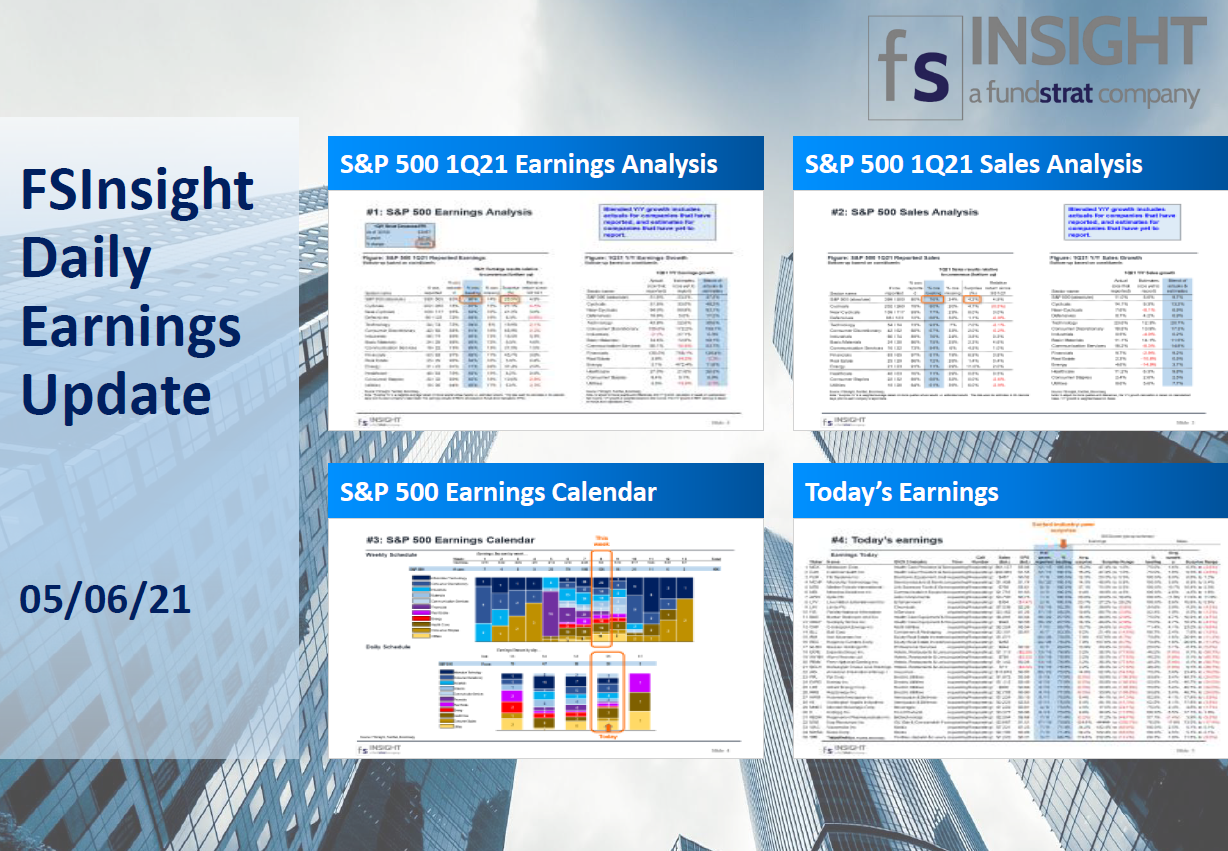 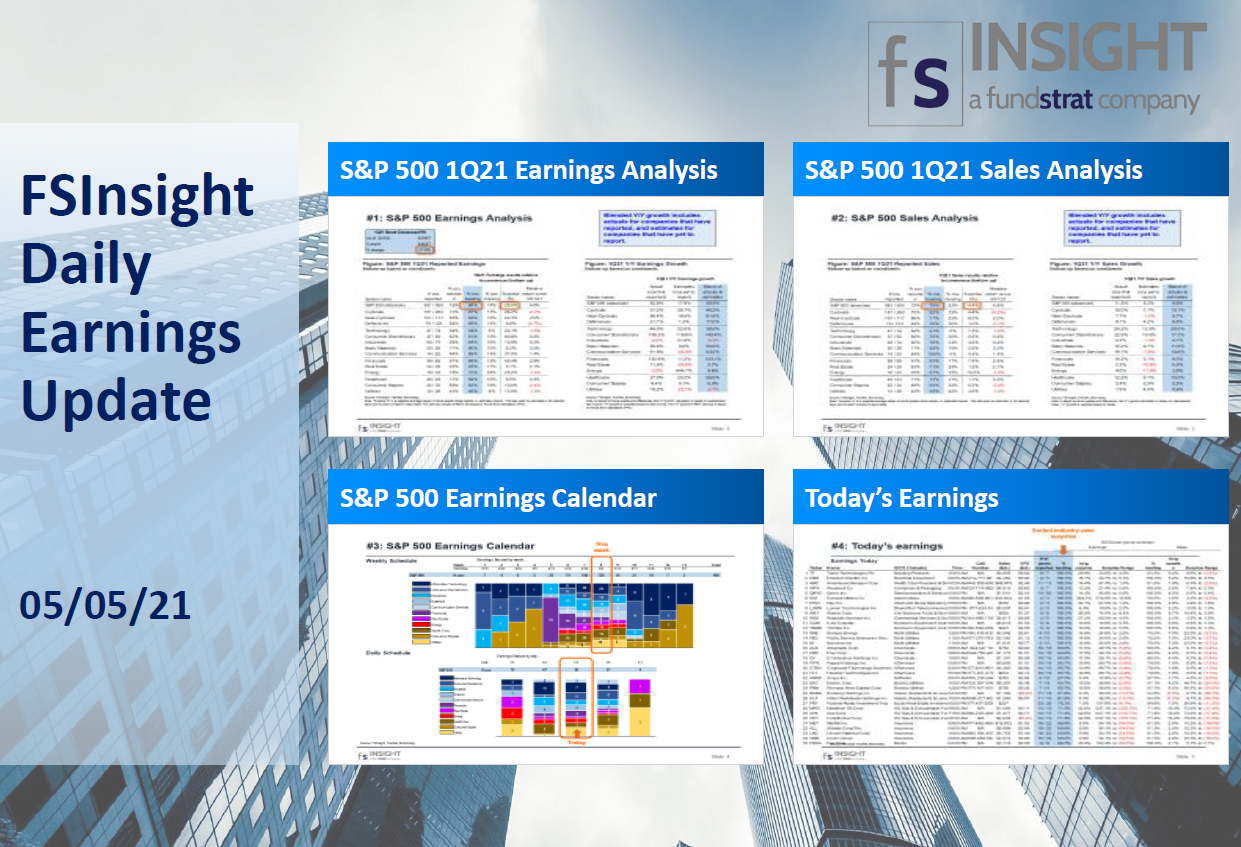 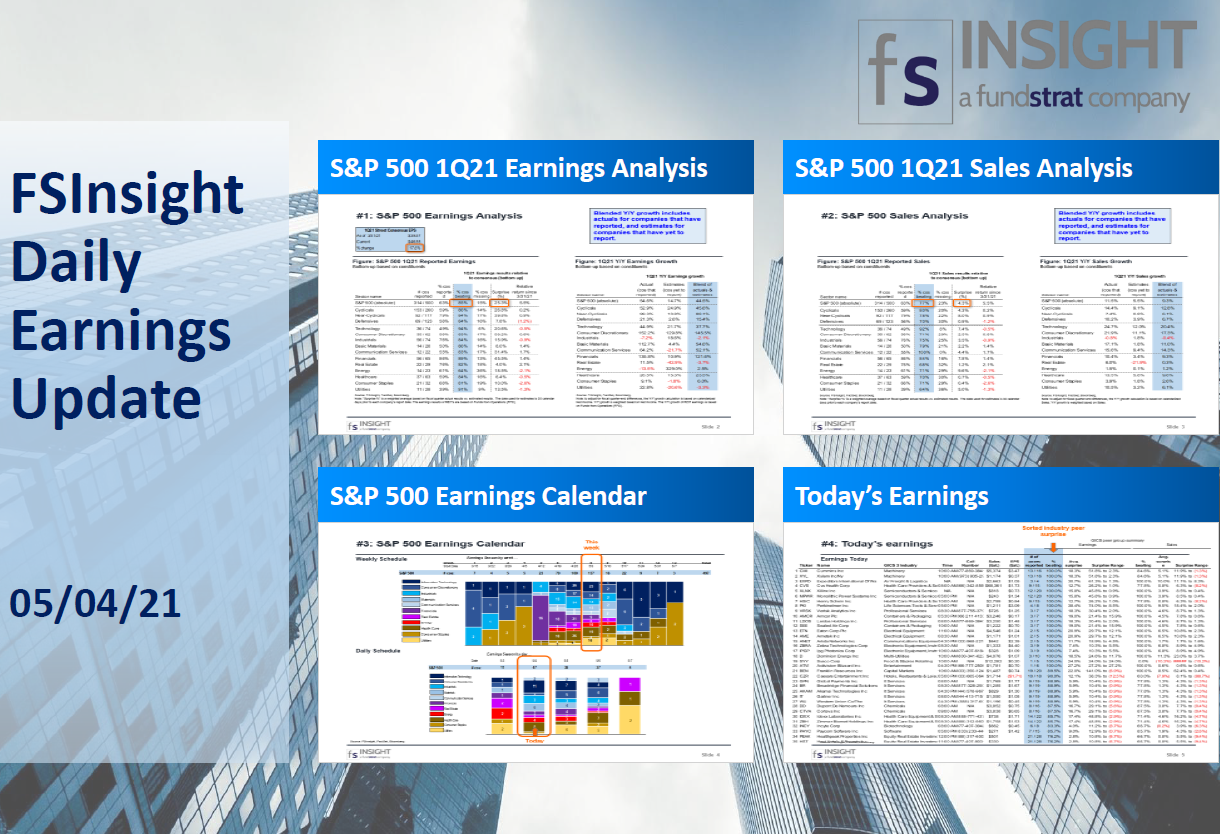 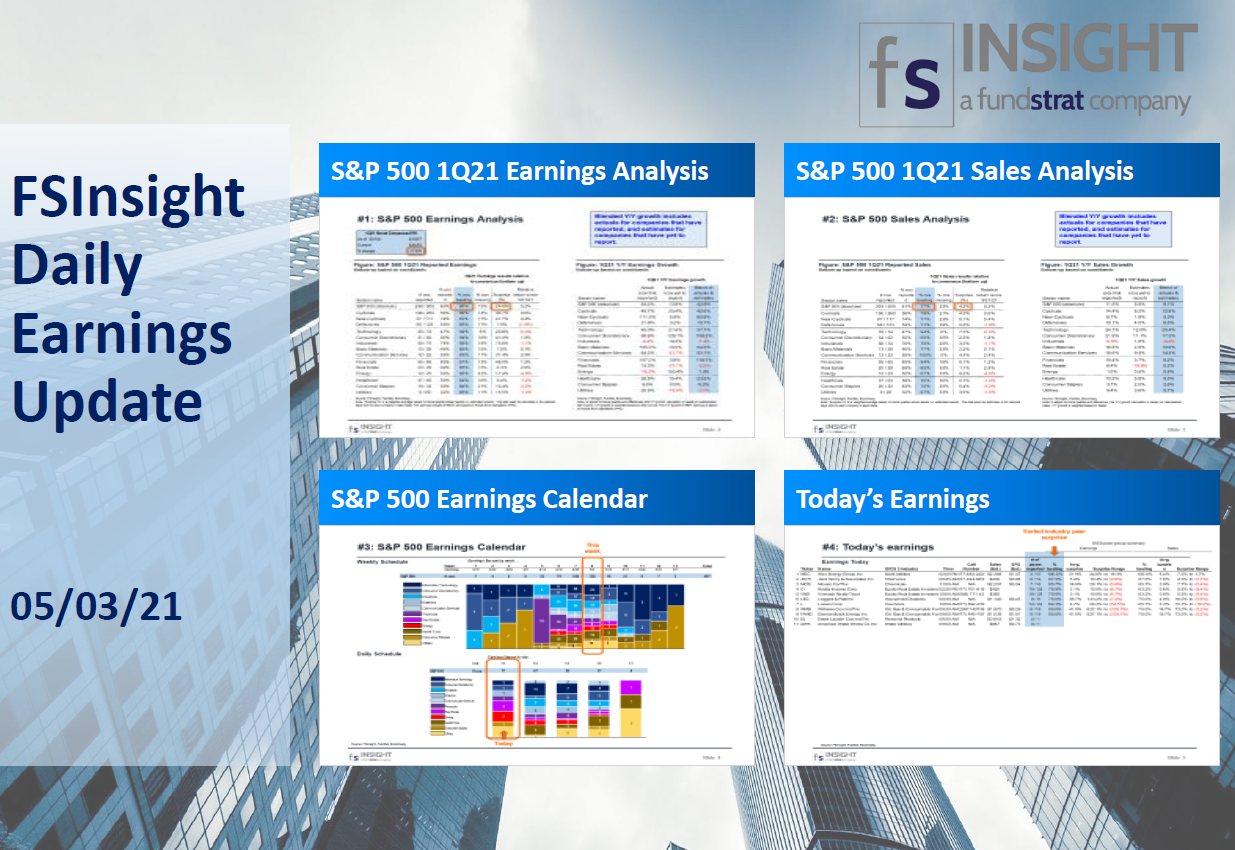 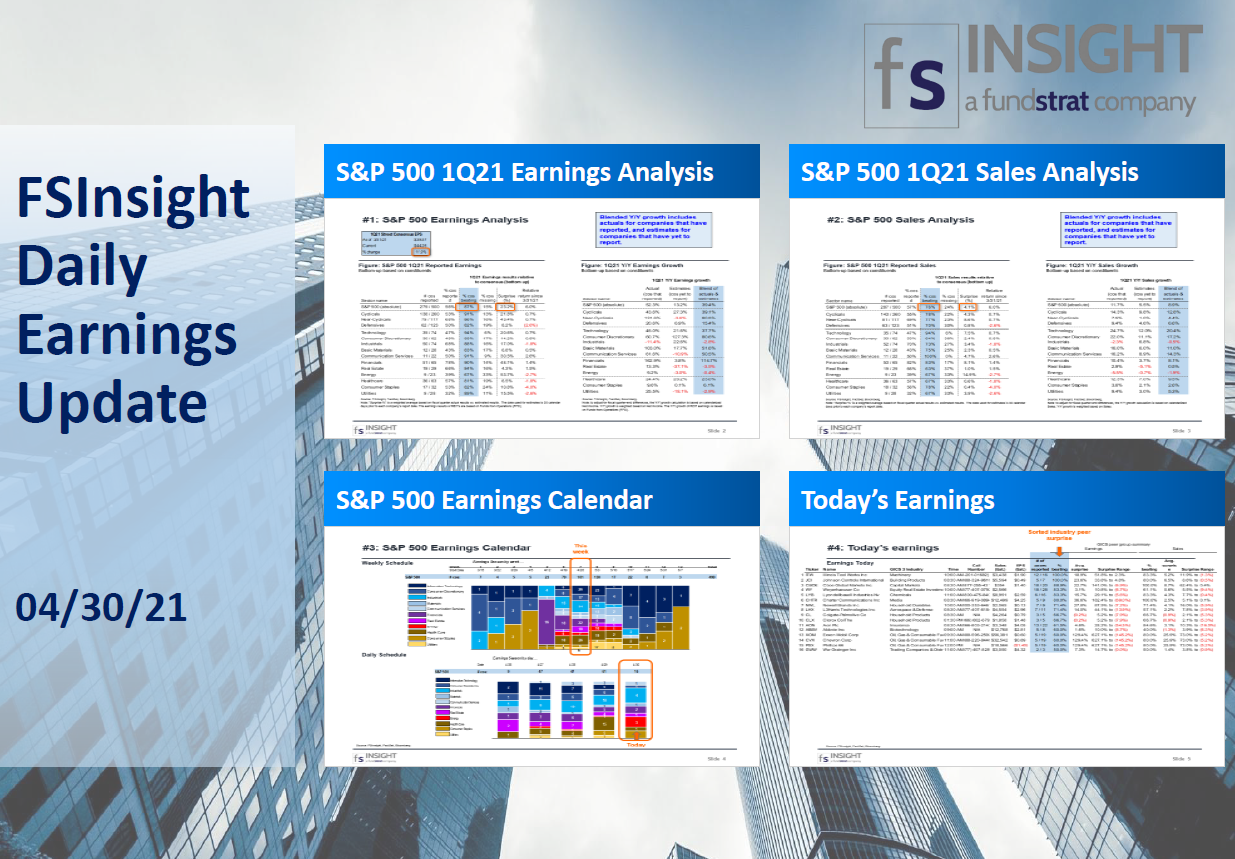 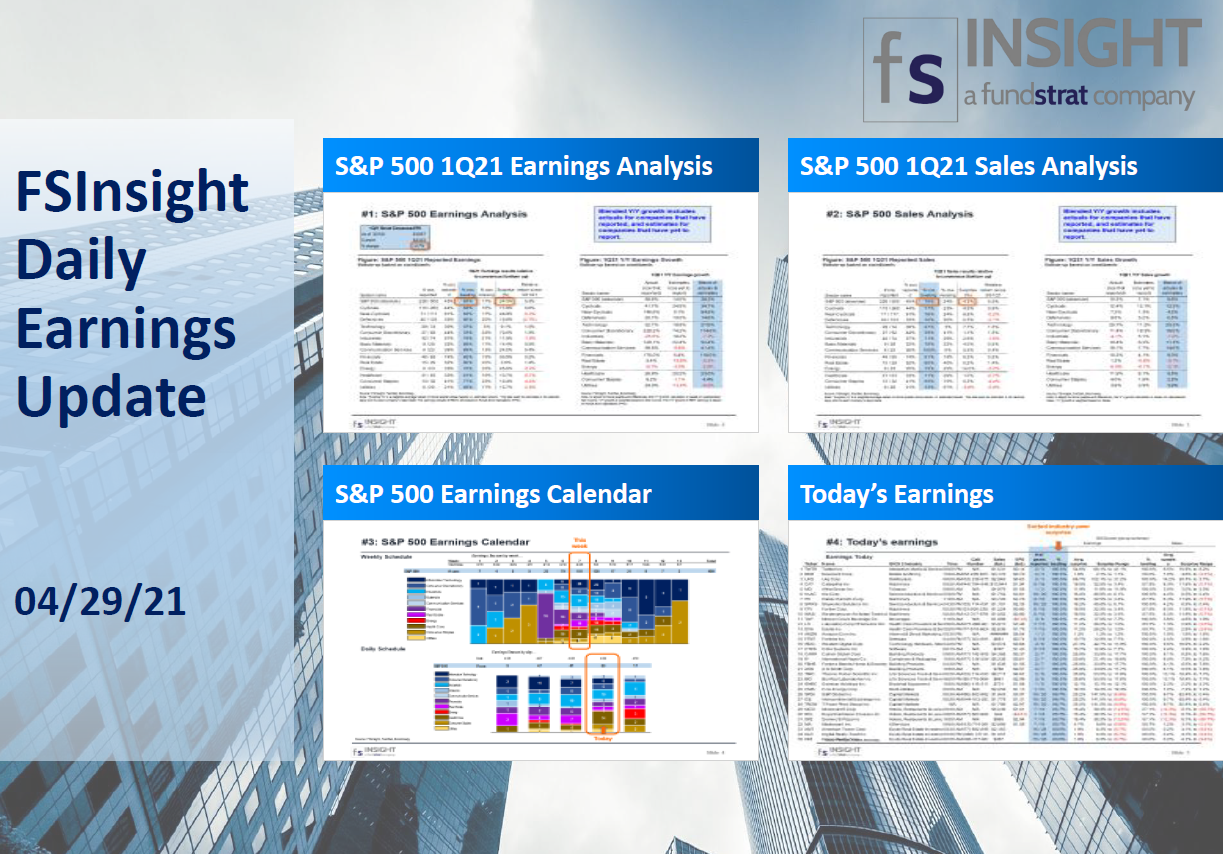 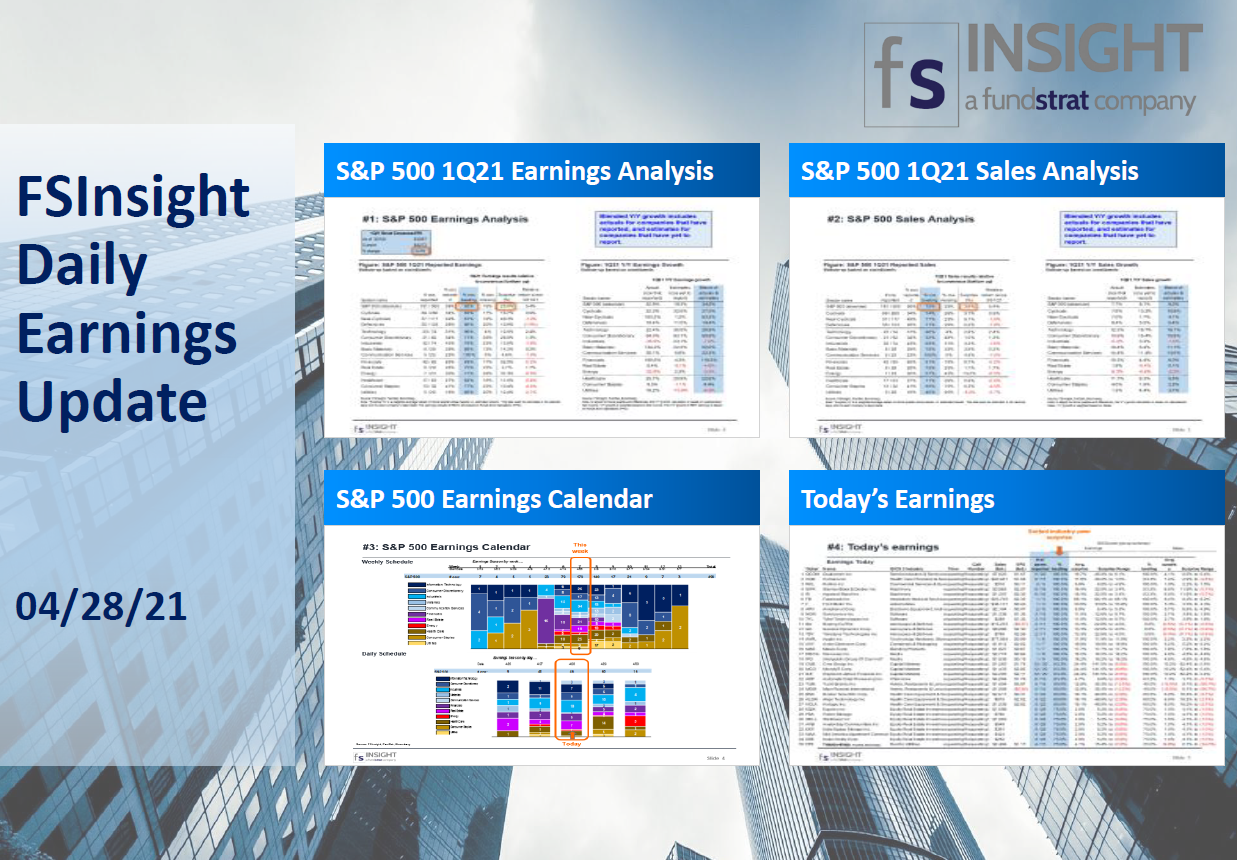 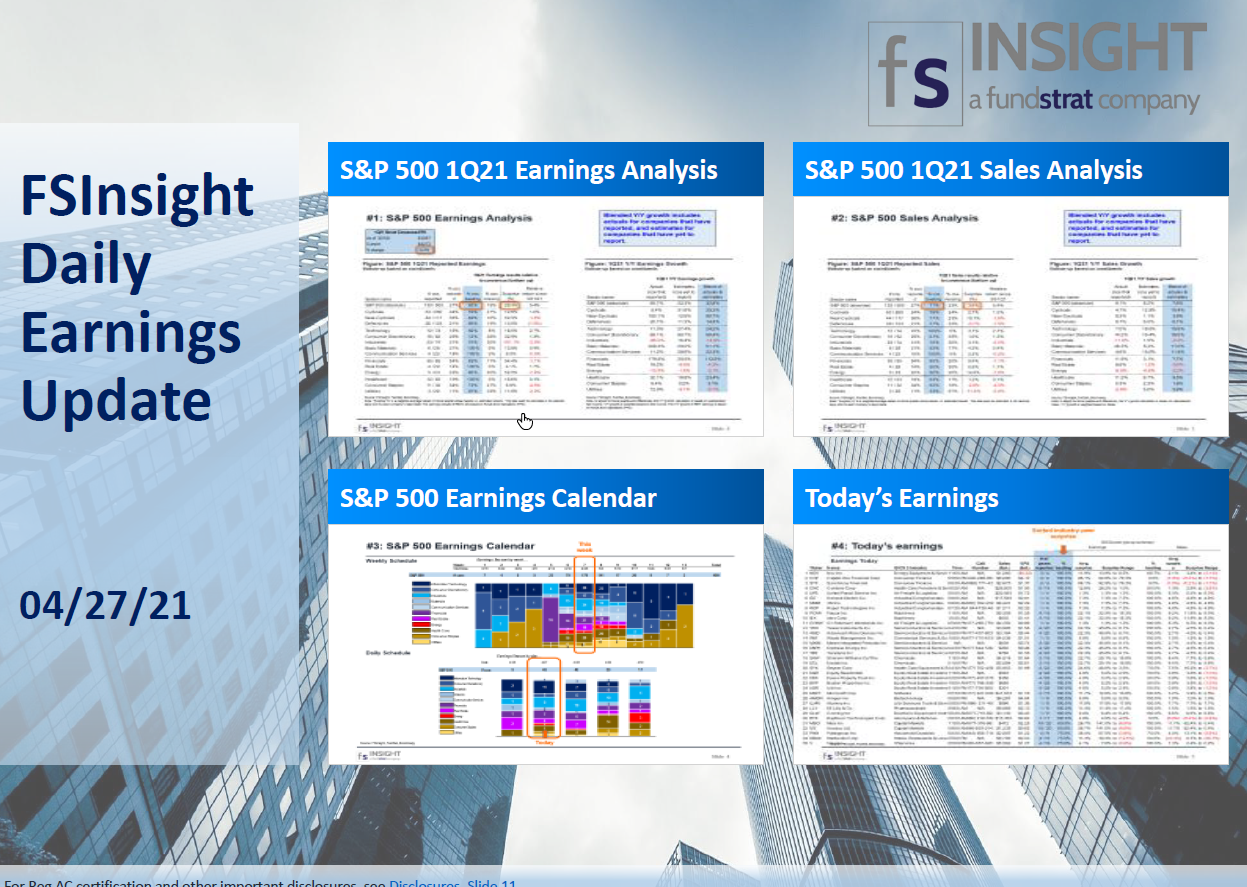