Crypto: Back from the Dead?

April 29, 2019 Is crypto-currency back? It’s a legitimate question given the across the board huge drops seen among crypto-currencies in 2018. There was blood on the street.  This year, however, they seem to be coming back from the dead. Legitimate or is this a zombie bear trap? There are reasons to be cheerful, however. For one thing, there remains a fairly high level of skepticism and apathy towards the recent recovery in crypto prices. Bitcoin, which was up about 75% to over $5,000 recently, remains down 85% from its highs (the 4th time in 10 years for this). A skeptical market is healthy, and makes for more sustained moves. It makes sense that the psychology around crypto is heavily damaged. After all, the vast majority of crypto holders experienced severe losses and for those who owned “alt-coins,” the declines are even deeper than 90% or more. But as each week has progressed in 2019, evidence is mounting that a potential new bull market is underway. When will consensus reach that “tipping point?” No one can say exactly when with certainty, but below are 11 signs that the dark, cold crypto winter could be over. 1. Nov 2018—The “fork wars” of Jihan (BCH) versus Craig Wright (BSV) exhausted “overhang” BTC supply held by their mining pools. And while BTC collapse to $3,200 followed, the massive supply is gone. 2. December 31, 2018—Grayscale’s Bitcoin Investment Trust (OTC: GBTC) sees NAV premium fall to 5%, the lowest since early 2017 and historically marks “capitulation.” The premium has since surged to about 40%. 3. January 23, 2019—On-chain transactions per day turn positive year on year, the first time since January 2018 (consistently). 4. March 27, 2019—Fundstrat’s Bitcoin Misery Index (BMI) crossed above 67 for the first time since August 14, 2017. Since 2015, the BMI has never been >67 in a “Bear market.” 5. April 1, 2019—200D cross: Bitcoin closed above 200 day moving average, the first time since March 2018 (13 months). 6. April 2, 2019—Noted crypto twitter personality @ParabolicTrav (Re-emergence tweet) reappears after a 7 month hiatus. 7. April 18, 2019—Tuur Demeester publishes “Bitcoin in Heavy Accumulation” (Tuur/ Adamant report here) which makes the assertion that HODLer wallets have begun to accumulate Bitcoin. 8. Mid-April: OTC volumes surging. Multiple OTC brokers report that new client activity has surged 60%-70% versus just four months ago, and many accounts are re-accumulating bitcoin. 9. Mid-April: On-chain activity surging. 10. April 22, 2019—Willy Woo posts survey of 20-ish Crypto OGs (slang “original gangsters”) and even noted bears see high probability Bitcoin has bottomed (survey here) (Slide 4). 11. April 23, 2019—BTC golden cross. Bitcoin 50 day moving average rises above the 200 DMA. Historically that’s a bullish technical signal. If this turns out to be a crypto inflection point, investors might ask themselves what the next cycle will look like.  FS Insight  thinks the bull cycle will resemble prior cycles, meaning the “halvening” will be a catalyst in 2020 and likely new all-time highs around then. WHAT COULD GO WRONG?: Bitcoin continues to be vulnerable to “whales.” No worry about capital gain taxes this year. Bottom line: The odds the crypto winter is over is rising with each passing week. 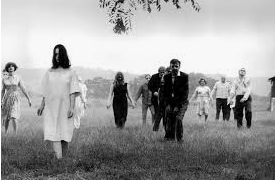